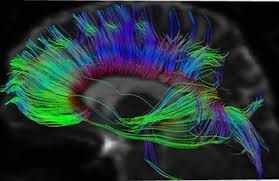 Anyone who has defended a recent Traumatic Brain Injury (TBI) case will be familiar with the plaintiff's attempt to use Diffusion Tensor Imaging (DTI) to prove the lifelong effects of a brain injury. DTI is a relatively new technology that is popular for imaging the white matter of the brain.

The diffusion tensor was originally proposed for use in magnetic resonance imaging (MRI) by Peter Basser in 1994. According to the National Institute of Health, "DTI is a sensitive probe of cellular structure that works by measuring the diffusion of water molecules. In simplified terms, diffusion imaging works by introducing extra gradient pulses whose effect 'cancels out' for stationary water molecules and causes a random phase shift for molecules that diffuse. Due to their random phase, the signal from diffusing molecules is lost. This loss of signal creates darker voxels (volumetric pixels). This means that white matter fiber tracts parallel to the gradient direction will appear dark in the diffusion-weighted image for that direction."

The typical case comes with a diagnosis of closed head trauma with post-concussion syndrome. Findings can include a normal CT scan of the head taken in the emergency room, with a follow-up normal MRI of the Brain. A Neurologist will order EEG testing and Brainstem Auditory Evoked Potential testing to rule out diffuse cerebral dysfunction. All traditional testing is reported as normal. However, Diffusion Tensor Imaging of the brain is also performed with an impression of "traumatic white matter injury".  The plaintiff's Bill of Particulars claims brain atrophy, accelerated dementia, loss of brain life, posttraumatic stress disorder, anxiety and depression. You now have a case where your Neurologist confirms a minor concussion.

Your mild concussion case now has millions of dollars in future damages that the plaintiff's attorney can "blackboard" in front of a jury. Your experts are telling you the TBI team of Drs. Monte S. Buchsbaum and Michael Lipton are not credible. However, you are in Brooklyn or the Bronx for the trial, with a likable plaintiff and $5,000,000 in insurance coverage. What do you do with that case?

The need for a qualified neuro-radiologist to discuss the diagnostic testing including PET imaging and DTI testing is critical. You need your neuro-radiologist to opine:  "PET imaging is a modality which is used for evaluating the use of oxygen within the brain.  The pictures or maps that were provided can be easily manipulated manually on a machine. The scale can be infinitely changed based on the whim of the examiner. There is no supplied mathematical data to confirm the pictures that were provided.

Additionally, PET CT can only determine uptake of oxygen. It can distinguish between structural or metabolic abnormalities. The areas described as abnormal on the PET scan do not correspond with areas of abnormality noted on the brain MRI or the diffusion tensor imaging.

The fact that there is no agreement between any of the three studies indicates that there is no clear-cut anatomical abnormality that can be designated as a traumatic injury. Additionally, if the patient had an occipital abnormality, one would anticipate a visual disturbance.  This has not been reported and was suggested that if this finding is in fact real, this represents a spurious result.

In my opinion, this is a nonspecific examination demonstrating oxygen utilization. There is no definite relationship to trauma. Areas reported as abnormal on the PET scan did not correspond with the areas reported as being abnormal on diffusion tensor imaging. Neither study agrees with the findings on the MRI. In my opinion, PET CT of the brain for traumatic brain injury remains an investigational tool and without relevance on a single patient basis."

In the alternative, the defendant moved for an order directing plaintiffs to disclose the actual data and information regarding the subject neuro-radiological studies which plaintiffs' experts relied upon in coming to their conclusions. Judge Hudson concluded:

"The march of science is inexorable. This has created a challenge for trial courts in deciding what 'scientific' evidence is truly worthy of the name. How is a judge, a presumed expert in jurisprudence, but a layperson in science, to make such a determination? It is the court's solemn duty to winnow the proof, finding and separating the modern-day alchemy from chemistry as a metallurgist would remove dross from gold. In the 95 years since Frye was handed down to us, case law and medicine have both developed. Other jurisdictions have abandoned the Frye analysis and embraced the reasoning in Daubert v. Merrell Dow Pharmaceuticals, Inc. (509 US 579 [1993]) (see Fed Rules Evid rule 702). New York, however, has continued to follow the Frye rule, wisely leaving innovation to scientists and legislators (e.g. Parker v Mobil Oil Corp., 7 NY3d 434 [2006]; People v Wesley, 83 NY2d 417 [1994]).

As Frye evolved, its progeny added the refinement that the term "general acceptance" did not refer to a mere headcount of experts. Instead, it became clear that there should be a clinical (not just scientific) consensus, and that the proper foundation be laid as well as acceptable methods employed in each particular case (Parker v Mobil Oil Corp.; Sadek v Wesley, 117 AD3d 193 [1st Dept 2014], affd 27 NY3d 982 [2016]). This is the analysis we apply to the instant controversy.

This case began in 2005 and in the intervening passage of time, DTI technology and the scientific/medical literature discussing it has proceeded apace. Early indications of approbation, however, have given way to doubt regarding acceptance of DTI technology to evaluate mild brain trauma injuries.

A significant case cited by plaintiffs is LaMasa v Bachman (56 AD3d 340 [1st Dept 2008]). The Appellate Court found that DTI technology met the Frye standard. At first glance this would seem to end the inquiry. On the contrary, LaMasa was followed by a "white paper" in 2014 which cast the First Department holding into doubt (M. Wintermark, P.C. Sanelli, Y. Anzai, A.J. Tsiouris & C.T. Whitlow, Imaging Evidence and Recommendations for Traumatic Brain Injury: Advanced Neuro- and Neurovascular Imaging Techniques, Am J of Neuroradiology [Nov. 2014]). Immediately after its publication, it gained notoriety among the neuroradiology community. This white paper (supported and endorsed by members of the scientific/clinical medical community) holds that new advances in neuro-imaging techniques are showing promising results in group comparison analyses (DTI, positron emission tomography, quantitative electroencephalogram, etc.). Nevertheless, the article concludes that there is insufficient evidence supporting the routine clinical use of advanced neural imaging for diagnoses and/or prognostications at the individual patient level.

In deciding the significance of the white paper (whose authenticity is not questioned), the court is guided by the recent holding in Dovberg v. Laubach (154 AD3d 810 [2d Dept 2017]). Dovberg emphasized that the burden of proving general acceptance of scientific principles or procedures for the admissibility of expert testimony rests upon the party offering the disputed expert testimony. That general acceptance of scientific principles or procedures which are required for admissibility of expert testimony can be demonstrated through scientific or legal writings, judicial opinions, or expert opinions other than the proffered expert. In addition to the requirement that the technology be generally accepted (and supported by adequate documentation), the movant must meet the standards of Parker v Mobil Oil Corp. Applying the prior precedents in Dovberg, the Second Department found the proposed "expert testimony" to be inadmissible based on the defendant not meeting his burden of proof. Specifically, the Second Department found that the expert testimony did not meet generally accepted scientific principles (Frye). The Court noted that the proffered evidence failed to make reference to any empirical data or any peer-reviewed journals, and did not provide the names of the authors and years of publication (Parker) (Dovberg at 813-814).

The parallels between this case and Dovberg are clear and dispositive. The white paper by M. Wintermark, et. al. makes it clear that DTI technology is not generally accepted as yet in the field of neurology for use in the clinical treatment of individual patients. The rule in LaMasa v Bachman, though superbly researched and written, has been outpaced by current scientific knowledge. Accordingly, evidence of DTI technology must be shielded from the jury's review.

Consequently, based on the issue of general acceptability in a given field, the court finds that DTI does not (at the time of this writing) have a general acceptance to be used as the standard in clinical/medical treatment of individual patients who are being treated for TBIs. As additional arguments against plaintiffs being permitted to have their expert testify that DTI technology is generally acceptable, defendants proffer other arguments, including plaintiffs' failure to respond to a prior court order to comply with CPLR 4532-a, and a failure to produce the underlying data which plaintiffs' experts relied on in which the defendants' experts would need to do an independent review of their own, for a possible "Frye" and/or a "Parker" hearing. We also find these arguments to be compelling.

All of the foregoing obliges the court to the following conclusion:  Under the circumstances presented, the court denies plaintiffs' motion in its entirety. The defendants' cross motion to preclude plaintiffs from using DTI technology by their expert is granted. While defendants have other requests for relief which are meritorious, they are rendered moot by this court's decision and need not be further addressed."