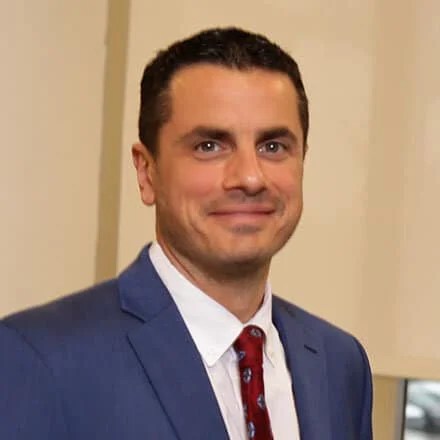 Gerard Ferrara studied Business/Italian and graduated SUNY Albany in 1999.  He spent over a decade in corporate America, beginning in finance, then shifting to the advertising world for a career publication and media company.  Here he quickly climbed to management as an Executive VP, and became the youngest member of the Executive Board.  To further round out his experience, Gerard went on to study at Cornell University, earning a Professional Certificate in Executive Leadership, while simultaneously consulting for other media companies to launch their advertising sales platforms. With a solid foundation of business and leadership experience, his next endeavor and entrepreneurial spirit led him to start his own successful construction company.

Attending Hofstra Law School, Gerard served on the Planning Committee for the 2012 U.S. Presidential Debate held at Hofstra.  Graduating early, he earned a JD with Honors, with a Business Law Honors Concentration.  After working for a small firm and gaining experience in drafting and research, he spent several years working as in-house Staff Counsel at GEICO.  Much of his accolades revolve around his success in Motions and Appeals, and his work in settling and resolving an unprecedented number of cases.  His drafting work is often cited by the Court and other practitioners in the field.

Gerard’s greatest accomplishment was finally convincing his high school sweetheart to marry him.  He resides in eastern Long Island, with his wife and three children.